In the year 2000, Ivan joined the Church of Guanajuato I attended. However, we did not interact much because of the age difference. A few years later we had the opportunity to attend youth group together where we began to interact more. Later when I turned 15, I asked Ivan if he could lead my Sweet Fifteen ceremony. From that moment onwards we began to interact even more due to the many Bible studies and ministries we shared. There was a time in our lives when we interacted daily: We attended youth group, Sunday meetings, prayer meetings, college Bible study, and evangelistic studies. We had the opportunity to get to know each other in a way where neither of us had any interest in each other. We did things we might never have done if there had been mutual interest. After this, our friendship grew even more.

Church picture. Can you find Ivan and I?

When I was a kid, my mom always taught me that I should wait for the man God would send for me. A man who loves God more than me. After a few years of friendship, we started to take an interest in each other, but we both knew we didn’t want a disposable relationship. We didn’t want to get hurt and we wanted the good of each. When Ivan finished college he moved to the US to study at Emmaus Bible College. So at that moment, we both knew our lives were going to take different directions. For a few months, we were without communication. But six months later he called me to tell me that he was interested in me and that he wanted us to start a relationship. He talked to my mom to ask her for permission. Our courtship was somewhat different from what we usually know, but it was a time when we got to know each other a lot. Our courtship was practically on the phone. We talked on the phone once a week. A year after he called to tell me he was interested in me and he asked me to marry me in a very unusual way. Since he was in the US and I was in Mexico, he had to come up with a clever idea to propose.

Our picture right after Ivan proposed

How we got engaged

One day Ivan called me to ask me a favor, he told me he had homework from his Greek class and that he needed help from people. He asked me to print a document he sent me (the document had around 10 sentences in Greek) I had to translate and record how long it took me to translate each sentence. He also said that I should not try to translate without him (not cheating) and that he would call me to take my time. He also said he was going to do the exercise with more people. That day at night he called me to do the “homework”. When we were on the phone, we started translating the sentences one by one and wrote down the time I was spending on each one. As expected, I started getting better and translating faster. So when we got to the last sentence he told me that there was a small change. The last phrase was written from right to left. I started translating and I remember I said the first two words aloud: “would you”. Then I stop talking and finished translating in my mind without saying anything else. Ivan asked me to finish vocalizing the translation and I told him that I was finished but I did not want to say it aloud. So, Ivan had no other option than saying “Would you marry me?” and I said yes!

He had to propose on the phone because we had to start doing my visa the paperwork. For this reason, I had the privilege to get a second proposal. When he was in town, he told me to meet him in “El Pípila” (A place in the city with a beautiful scenic view of the city) He told me that when I arrived I had to face towards the city and no peeking behind. So, I did as he said. When he arrived he hugged me from behind. And after a few minutes, he was on one knee, showed me the ring and asked me to marry him. I said: “Yes yes, but get back in your feet quickly” because people were watching and I was getting embarrassed. After that event, we had a small reunion where his parents came to meet my parents to formalize the engagement between families.

Our picture right after formalizing our engagement

Finally, after a year and a half of having started our relationship, it came on our wedding day. We had the opportunity to get married on June 13, 2008, and we give thanks to God for that. The day after our civil wedding we did a ceremony. We did not have any plans for a celebration, but thanks to the help of our families we were able to have a ceremony attended by family and friends with whom we could share our joy of uniting our lives. And also we were to share the salvation that Jesus Christ offers for all who believe in him. That day I had some setbacks, so I arrived almost 2 hours late, but God used that setback so that all the guests that don’t know Christ were present and had the opportunity to hear about God. From that moment our ministry as a couple began 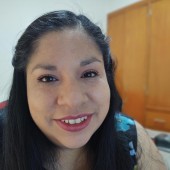 See what is new in your email

You have Successfully Subscribed!